This ZEP is accompanied by the sharding extension specification [SHARDINGSPEC]. A public review of the specification is done in PR #@152 of the zarr-specs repo.

This ZEP proposes to add a sharding storage transformer to the Zarr specification version 3. This permits combining multiple chunks into storage keys, enabling the usage of larger arrays with Zarr.

Currently, Zarr maps one array chunk to one storage key. This becomes a bottleneck as storing large arrays usually requires a large number of chunks, which becomes inefficient or impractical to store when a chunk is mapped directly to files or objects in the underlying storage. For example, the file block size and maximum inode number restrict the usage of numerous small files for typical file systems, also cloud storage such as S3, GCS, and various distributed filesystems do not efficiently handle large numbers of small files or objects.

Increasing the chunk size works only up to a certain point, as chunk sizes need to be small for read and write efficiency requirements, for example to stream data in browser-based visualization software.

Therefore, chunks may need to be smaller than the minimum size of one storage key. In those cases, it is efficient to store objects at a more coarse granularity than reading chunks.

Sharding solves this by allowing to store multiple chunks in one storage key, which is called a shard: 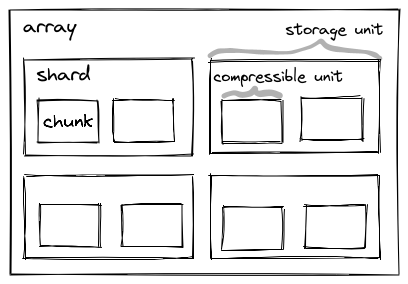 The following example illustrates the need for sharding:

To allow interoperability between different stores and Zarr implementations, we propose to standardize sharding as a storage transformer specification.

Sharding allows storing very large, chunked arrays, which currently would have inefficient access characteristics or might even be impossible to store as generic Zarr arrays.

Currently, these large-scale datasets are made available through tool-specific formats, such as neuroglancer-precomputed or webknossos-wrap, which support sharding. While the data is accessible and explorable in individual software tools, wider interoperability with other software tools is limited. Whereas it has been possible to convert smaller datasets to work in different tools, it becomes infeasible for large-scale datasets. The choice of tool-specific formats is in part a result of the lack of a standard format that makes storage and processing of very large datasets practical. Providing sharding in Zarr would allow Zarr to become the standard format also for tera- and peta-scale array data and future-proofing it as a standard for the requirements of growing data sizes in the scientific community.

This ZEP introduces a Zarr extension for Zarr version 3. The sharding extension is optional for data producers, and only necessary when reading arrays that are written using the sharding extension. It corresponds to a minor version change in semantic versioning, adding functionality in a backward compatible manner.

Combining regular blocks of chunks in a shard

To add sharding to Zarr, data that was stored previously as separate objects must be combined. Different strategies can be considered when sharding array data, such as:

All of those strategies only shard the array data and not the metadata, since the latter is not big enough to warrant sharding and also because the sharding configuration itself is stored in the metadata.

Strategy 2 is a strict super-set of strategy 1, as sharding across a single dimension can be produced by sharding with n-dimensional blocks where all blocks consist of single chunks except for the selected dimension.

Strategy 3 permits balancing loads better between shards than the other two strategies. Since all shards will often be served via the same underlying storage, load-balancing does not have a high priority in this use case.

This ZEP proposes to use strategy 2, using regular n-dimensional blocks of chunks as sharding units, as it combines multiple chunks that are close to each other. This has the benefit of co-locating data that is usually accessed together or in short succession.

Shardings as a storage transformer extension

Sharding can be an optional addition to the current Zarr features, as it is primarily important for very large arrays. Therefore it should be added as an extension, which can enhance different Zarr implementations.

Therefore, sharding should rather be implemented as a storage transformer, which permits consistently addressing array data across different stores and ensures compatibility across implementations, by specifying an authoritative specification.

The following part is cited from the accompanying sharding extension specification [SHARDINGSPEC]:

The only binary format is the indexed format, as specified by the type configuration key. Other binary formats might be added in future versions.

In the indexed binary format chunks, are written successively in a shard, where unused space between them is allowed, followed by an index referencing them. The index is placed at the end of the file and has a size of 16 bytes multiplied by the number of chunks in a shard, for example 16 bytes * 64 = 1014 bytes for chunks_per_shard=[32, 2]. The index holds an offset, nbytes pair of little-endian uint64 per chunk, the chunks-order in the index is row-major (C) order, for example for chunks_per_shard=[2, 2] an index would look like:

Empty chunks are denoted by setting both offset and nbytes to 2^64 - 1. The index always has the full shape of all possible chunks per shard, even if they are outside of the array size.

The actual order of the chunk content is not fixed and may be chosen by the implementation as all possible write orders are valid according to this specification and therefore can be read by any other implementation. When writing partial chunks into an existing shard no specific order of the existing chunks may be expected. Some writing strategies might be

Any configuration parameters for the write strategy must not be part of the metadata document, they need to be configured at runtime, as this is implementation specific.

Reading single chunks can be done in two ways, depending on the capabilities of the underlying storage:

The first method might especially be useful when caching not only the requested chunks but the whole shard, which will save bandwidth if subsequent chunk-requests are close to the previous chunks.

Storing a stream of data slices

Many image acquisition techniques produce slice-wise data, such as timeseries or z-slicing. This data can be written slice-wise using one of the following techniques:

A Python implementation is drafted in the zarr-python PR #1111.

To the extent possible under law, the authors have waived all copyright and related or neighboring rights to ZEP 2.